The weather is getting better and more and more riders are getting their bikes out, a joyful moment for many of us. We here over at Moto Intel Report did the same and Tom will briefly outline how it went down in his Sierra Gorda Occidental ride report. It was so epic I even injured my wrist from hitting the gas and breaks too hard and too often.
Guido will cover the Gear section as well as share progress on Scenic’s big update. He also discovered a new toy: the Husqvarna Vitpilen and will tell you about it. In the maintenance section I will explain what you can do to increase your grip on the road and therefore improve road safety. Last but not least, Tom will educate you about a gadget you probably have not given much thought: Trailer ramps.
Now, without further ado, let’s get rolling… 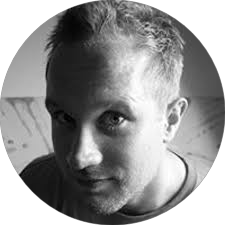 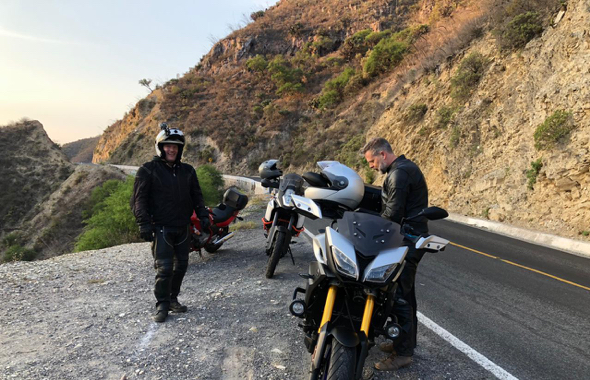 With the rainy season approaching fast down here in Mexico, we’re itching to schedule a couple of epic rides.

One of those was two weeks ago when we ventured into some known, and some lesser known territory in the Sierra Gorda Occidental. We left Guido’s place in Queretaro early on Saturday morning for a 650km (400mi) day. First stop: Pena de Bernal – Bernal is where the mountains and the curvies start. The first 130 km (80mi) are a combination of very sharp and tricky curves and breathtaking views.

Jalpan de la Serra at roughly 1/3 of the trip could be a good place to take a breather as you leave the first chain of mountains behind you. The next 90 km (55mi) see a rapid change in vegetation as the dry, desert-style slopes turn into lush, green hills. Xilitla offers yet another good opportunity to stop and grab breakfast/lunch and to visit the surrealistic gardens of Edward James: one of the most eccentric and interesting twentieth-century collectors of surrealist art.

Just before noon, we decided to ditch Xilitla and race to the super epic Tamul waterfalls. After 30 min of offroad fun, Jasper injured his wrist, Guido lost his mirror and steering stabilizer and I hit the dirt. A couple of battle-scars richer, we drove the remaining 250km (155mi) to the city of San Luis Potosi. 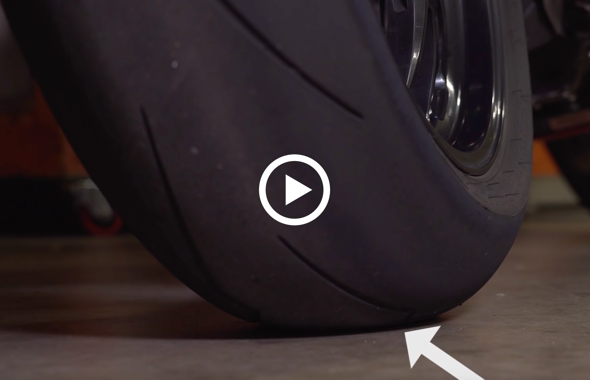 I want to bring up an important aspect of motorcycle maintanance, something many of us simply ignore after we checked it at the beginning of the season: tire pressure. Under-inflated tires affect handling and braking, as the lack of pressure means the tire wall isn’t firm enough to properly deal with the forces on it. Over-inflation can reduce the size of the contact patch on the road, affecting your grip. The right pressure you can find in either your manual or right under your motorcycle, there will be a sticker on your frame or swing arm. Warning: Don’t look at the side of the tire because that is the maximum allowed pressure. MC Garage explains it well in the above video. Mechanics recommend this pressure gauge. 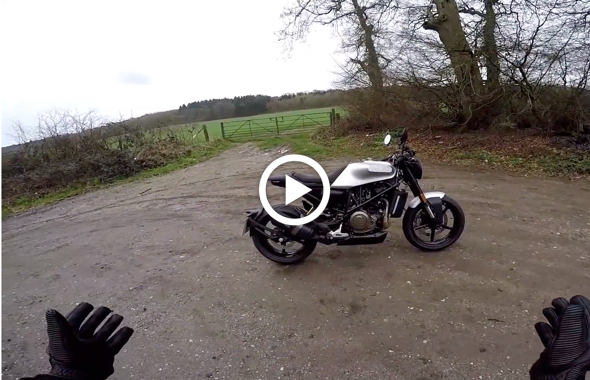 Originaly from Sweden, Husqvarna started producing motorcycles more than a 100 years ago, in 1903. After quite some acquisitions, transfers and location changes (from Cagiva to MV Augusta to BMW, etc.) ‘Husky’ ended up with KTM and in 2013 the production was moved to Austria.
Both the Vitpilen & Svartpilen 701 (white arrow and black arrow in Swedish) role with the 1 cilinder 693cc engine stemming from the KTM 690 Duke. They’ve been praised all over the media for their handling, lightweight, and responsive engine producing 75 bhp. It even has a quickshifter (up and down) as standard. The Svartpilen has an upright riding position, while the Vitpilen sits more sportier, making the ergonomics the most noticable difference between the two.
There’s a lot more to tell about why it’s so much fun to ride these bikes. But in stead of more text, here’s a video on the Vitpilen. 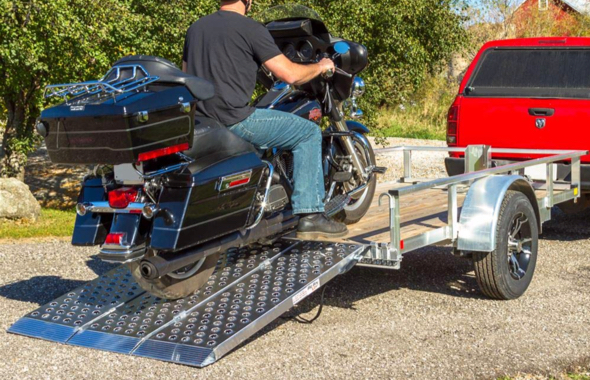 Sometimes you need to cross some boring territory to make an epic ride. Some companies offer transportation services or you can even pay someone to take your bike there, but if you own a flatbed truck or trailer, you might as well tow your own bike.

Loading and offloading the bike can be an absolute hassle, so it pays to be prepared.
Durability, weight, and of course safety are three important things when looking for a trailer ramp.

4wdlife has written a good review on both single track and full scale ramps. Check it out here. 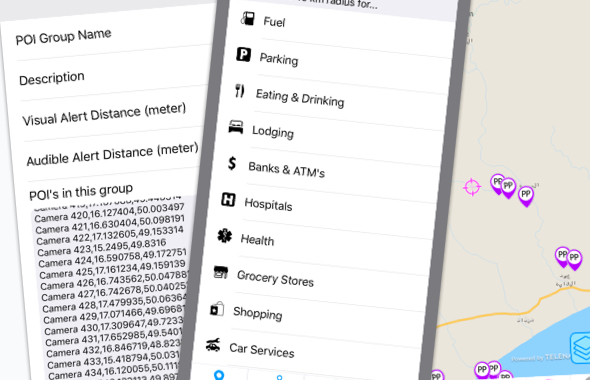 f you followed the ‘big update’ journey you know it has a completely new design and loads of new features. Here, I report on the progress and show you some of those new features. This time: Points of Interest (POIs)!
I received a lot of suggestions to include POI search and POI displaying on the map. So, this will be added in the big update. You can not only search for POI’s nearby, but also import your own custom POIs, display them on the map, and get proximity warnings for them during navigation. Have a look at the screenshots. You will also be able to choose them for a quick detour, for example a gas station nearby, but more on that in the next MIR.
Lastly I want to get ahead of you and answer a few questions that I get a lot:
Q: When is the big update ready? A: June
Q: When Android? A: I’m starting Android development after the big iOS update is out.
Q: Will I keep my purchases? A: Yes, you’ll only get more for them. Never less! 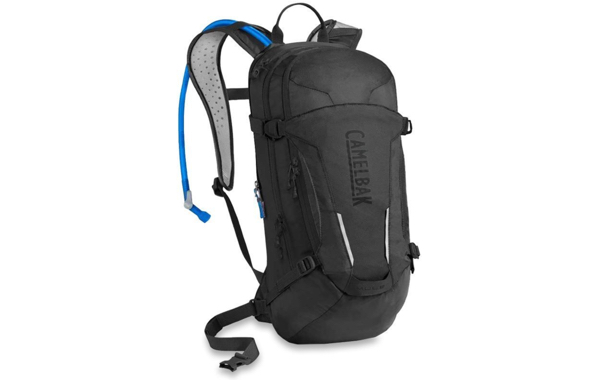 As you ride in the sun and hot weather you’re mostly moving fast, so you don’t notice the intense heat as much. The riding wind through your gear quickly evaporates your sweat which cools you down, but also dehydrates you much faster then normal.
It’s always a good idea to bring a big bottle of water with you. Especially if you’re riding in desolated areas where you might get stranded for many hours should you break down. Jasper, Tom and I experienced this first hand on a previous trip through Mexico.
If you have a case or tank bag on your bike, bringing a bottle is easy. But if you don’t have that luxury, or just prefer not to stop as much, a hydration pack might be the answer for you.
Hydration Packs are very popular in all kinds of sports, and there are many kinds available. But don’t just buy any pack, because a runner, for example, has different needs from a pack compared to a motorcycle rider. Here’s a good article on specific hydration packs for motorcycle riders.

After we posted Arthur’s picture of his Morgan in MIR’s previous issue, we got a couple of replies from other Morgan owners. The above photo pictures Michael’s 2018 Morgan Plus 4, with the beautiful Vienna Woods in Austria as a background. I promise next time we’ll post motorcylces again, but this one was just too nice to skip. 🙂 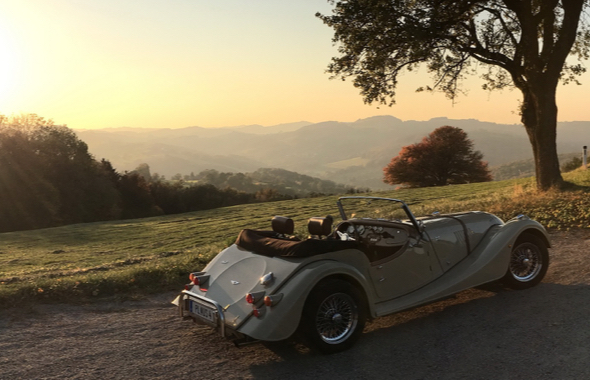