May is almost over and with just one week to kill before the Champions League final, we’re taking our motorcycles for a spin.
Contamination levels here in Mexico City have been awful over the last couple of weeks and when the (sour) rain finally came last week, it stained man and vehicle, so it’s time to pull the high-pressure cleaner out again.In this week’s Moto Intel Report, Guido tells you about another new feature of Scenic’s Big Update, the upcoming 75th D-Day anniversary and Cruise Control, while Jasper talks about the very affordable 2019 Suzuki V-Strom 650 XT Touring and reviews some fancy Kevlar jeans for your day-to-day commute.
Now, without further ado, let’s get rolling… 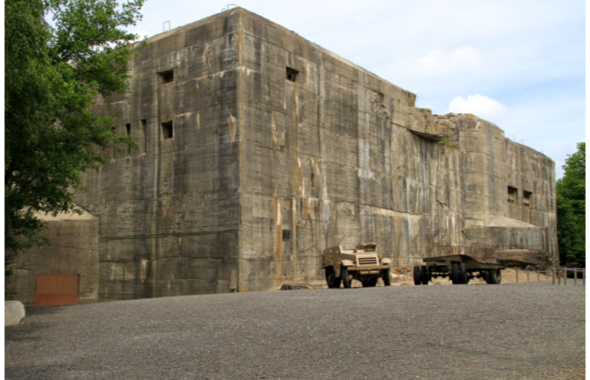 Frank, from the Netherlands, send in this Epic Ride. He and a friend are going on this ride from June 3 to June 7. It’s the 75th anniversary of D-Day. He planned 5 routes passing around 80% of the most important monuments, special events and re-enactments.
Although the events and re-enactments will only be on the above dates, the routes itself are rideable all year round of course. He published the routes in Scenic so you should be able to find them if you zoom in on the Normandy area. (Btw searching and sharing routes will become a lot easier in the big update… have a look below ;). 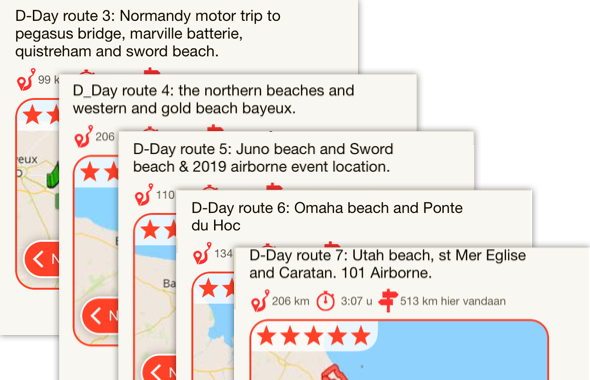 Here’s Frank’s Website on his Normandy Ride. It contains vast knowledge on the trip. Including how to prepare for it, detailed ride schedules, more information on the events and re-enactments, even the GPX files of the routes. It’s in Dutch so if you can’t read Dutch, open it in Google Chrome and put the translator on.
Thank you Frank for sharing this amazing ride with us! 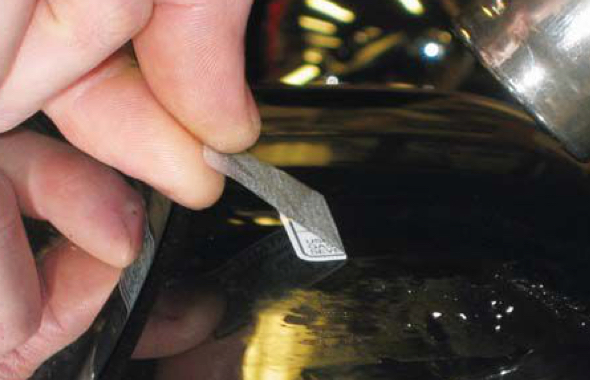 Safety stickers, decals or just some silly craft brewer trying to promote his beer on your motorcycle topcase… Some people love to stick souvenir stickers from the places they’ve visited on their bike, but I’m not one of them…My KTM has a massive safety sticker on the tank that reminds me that I shouldn’t drive faster than 160 kmh. The sunlight has bleached the sticker and I’d like to remove it, but what’s the right way to get rid of it?

Perhaps needless to say, but the worst thing you can do is trying to peel the cold sticker off with your nails or any other sharp object. It’ll leave a half peeled sticker and scratches on the plastic or metal surface. Once again, WD40 is your best friend. MotorcycleCruiser describes this in 5 steps how to remove stickers or decals with your (or your girlfriend’s) blow-dryer and some WD40. 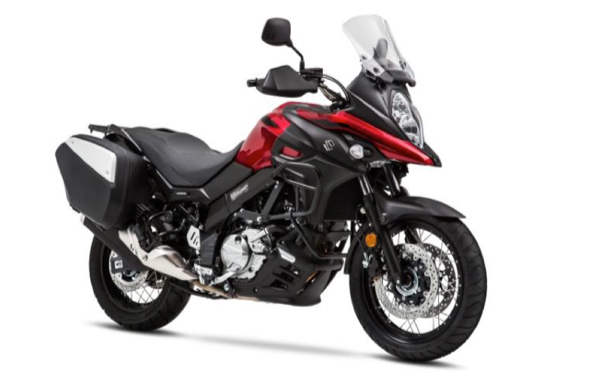 Are you looking for a lot of (Japanese) bike for your money? Look no further, let me introduce the 2019 Suzuki V-Strom 650 XT Touring. Her looks have improved over the years; her V2, four stroke 90 degree V-twin engine produces 69 HP and while she is still deceptively quiet she has an impressive range of 460 km (285miles) thanks to her 20.06 litres (5.30 gallons) capacity fuel tank and a fuel efficiency of around 23 kmpl (54mpg). Here are detailed specs. 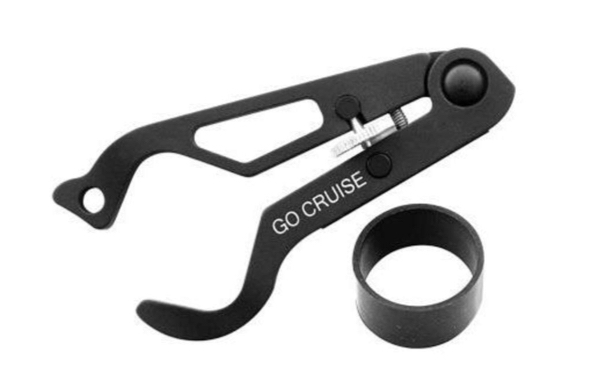 Unless your bike has cruise control from the factory, you’ve probably experienced “throttle wrist” pains at some point during a long trip. Throttle brakes are a cheap and easy way to give those aching muscles some relief without stopping.
Bear in mind that throttle brakes are not true cruise controls. They just hold the throttle open at a set position. Your speed will increase or decrease if you go downhill or uphill respectively. This specific model by Go Cruise is ‘Amazon’s Choice’ and has a 4.5 star avg rating. It can be overridden by rolling the throttle closed. Nevertheless be carefull with them. Only use them when the road ahead is clear and free of traffic.

If you followed the ‘big update’ journey you know it has a completely new design and loads of new features. Here, I report on the progress and show you some of those new features. This time: Searching and Sharing Scenic Routes!
Currently it’s quite a task to find Scenic routes. You’ll have to select a map area, then the routes in that area show in the map, 5 at a time. Sure there’s the list view, but still you’ll have to go through them manually. Especially if you already know the name of the route you’re looking for this can be a hassle.
In the big update this is going to be vastly improved. Not only can you search for public routes on the map; you can also search by name and nickname. And, if you want to share one of your public routes directly, you can also do this. Scenic will create a link for you to share with others. 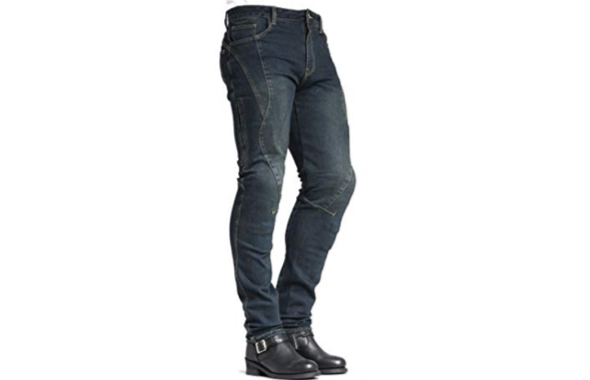 Don’t fancy walking around town in leather pants all day? Or is it simply too hot or too much hassle to take out the full leather outfit? These Kevlar jeans look pretty awesome, are comfortable ánd protect you from having a pretty messed up day may you run into trouble on your way. Of course you should know that there are safer options, but this beats ordinary jeans any day of the week. Order your pair here and help the MIR team keep this Moto Intel Report going.

This picture was sent in by Chris. To put it in his words:
“I got really lucky on that shot. Last year I drove my motorcycle from Phoenix – Death Valley, – Yosemite – San Francisco for work training that lasted a month. No way I could be away from my bike that long. I flew a friend in to hangout for the weekend and go riding. She took that shot going over the Golden Gate Bridge.” 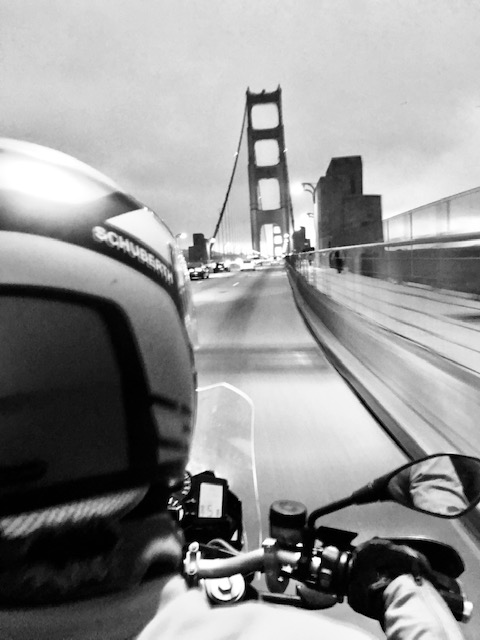