EICMA 2021 is now just one week away, and as the international motorcycle industry speeds up to meet (high) demand for new bikes, it also bets big on innovation and electrification.

The list of new motorcycle reveals is already vast, and while some brands have kept us completely in the dark about their newest models, others have already leaked some details.

Here’s the latest, fresh from the rumor mill:

MV Agusta is expected to present 2 new bikes under its Cagiva brand’s ‘lucky explorer project’, an ode to the Lucky-Strike sponsored Dakar rally team. The Italian brand has leaked only very little about the project, but we expect a motorcycle design based on the Turismo Veloce, possibly powered by a new 950cc three-cylinder. 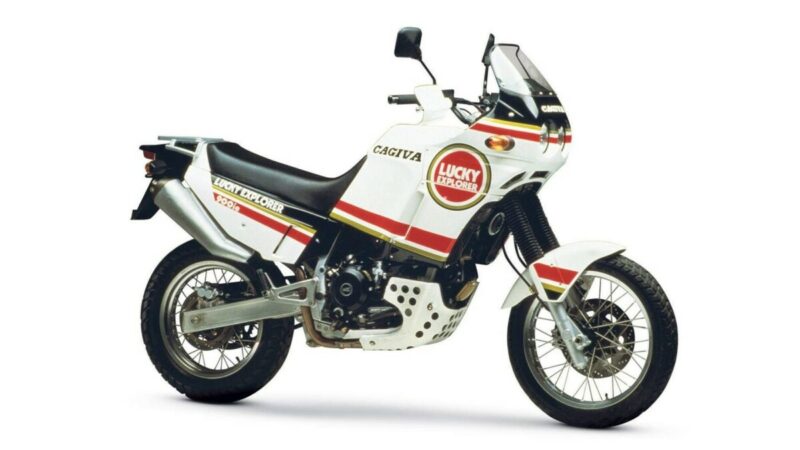 Kawasaki is set to reveal nothing less than 3 new motorcycles at EICMA 2021. Speculation is rife over what these models could be, but motorcycle news site Visordown expects an updated Versys 650. This sports-tourer bike was introduced back in 2015, and hasn’t seen any significant updates since.

Next to the sports-tourer, Kawasaki is expected to introduce a new generation ZX-6R or even a ZX-4R.  The Japanese brand axed the Ninja early this year, pretty much at the same time as Yamaha took out the R6. There’s just one question: will the ZX-6R still be Kawasaki’s best seller?

Kawasaki clearly has done its best to beef up its offering of conventional bikes, but the most exciting development is no-doubt its big bet on a mainstream electric/hybrid motorcycle. Earlier this year, we wrote about the testing of the Kawasaki EV Endeavor, an electric prototype bike built on the Z650 frame. A 2021 launch of a hybrid, or even fully electric motorcycle would no-doubt put the Japanese brand ahead of the competition at a time that the hype surrounding electric vehicles is at fever pitch.

Suzuki then, might or might not present new SV650 and V-Strom models at EICMA 2021. Especially the V-strom 650 is in dire need of replacement. Race fans are hoping for a completely new, 200bhp+ GSX-1000R model to replace the current one, which is currently already in its fifth year (without major updates).

Yamaha in the meantime has worked hard on introducing new models in its sportsbike lineup, such as the R7 and R3, but Yamaha racing enthusiasts are becoming excited about the possible launch of the Yamaha R9 which is set to bridge the gap between the R7 and R1. Trademark registrations have already pretty much confirmed this model that could see the light at EICMA 2021.

The other big Japanese brand, Honda, is set to surprise adventure riders with a brand-new Transalp model. Honda is said to outfit the new Transalp XL750L with a twin parallel engine. The market for mid-sized parallel-twin adventure bikes is becoming increasingly competitive with Yamaha, Honda, Aprilia and KTM, among others, vying for a part of the cake.

Notable absentees this year are Ducati, BMW and KTM. Industry-watchers are expecting product launches from all of these brands during the coming months, with some of the highlights being the new BMW R1300 which could set the tone for the replacement of the R1250GS, a new entry-level Ducati Multistrada, and the launch of the DesertX adventure bike. KTM has been less vocal about new launches, but Visordown expects a new version of the 1290 Super Duke.

Lastly, Benelli, the Italian motorcycle brand that is owned by China’s Qianjiang Motorcycle has already confirmed the presence of its brand-new TRK 800 adventure touring bike, and is also rumored to be presenting a large 900/1000 cc engine to be potentially shared with MV Agusta, which could mean a return to the top sports motorcycle class. Additionally, the company is said to be working on a 650cc Twin-Adventure bike which would compete in the already well filled, but very popular mid-sized adventure segment.