10 Reasons to Road Trip on a Motorcycle Versus a Car

Road trips are probably the most cleansing thing a person could do for their soul. No matter where you are in the world, the fresh air and open roads can work wonders for you. Best part is, there’s no law saying that you have to do it by car. If you own a motorcycle and typically reserve it for quick jaunts around town, it’s time to discover the joys of long-haul adventures. When the weather’s right, there’s no better way to take in this beautiful country of ours than on the back of a motorcycle. Today’s best touring motorcycles provide optimal comfort across hundreds of miles of road, so there’s no need to restrain yourself. Just pick a destination, pack up your gear, get on your bike and hit the road! 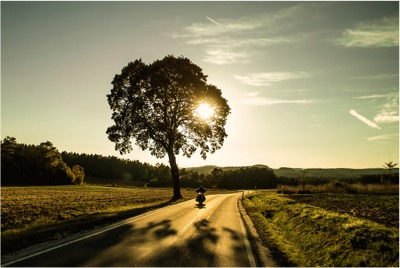 Why haven’t you left yet? If you still need convincing, here are 10 reasons to road trip on a motorcycle instead of a car.

Pack Lightly and Be More Streamlined

One common complaint about traveling is overdoing it and bringing along way too much stuff. Well, that’s never an issue when traveling by motorcycle, as you are pretty restricted in terms of how much luggage that you can carry. That’s especially true if you’re traveling as a couple. For an extended road trip, pack enough clothes for just a couple of days and plan to hit a few laundromats along the way. With so little stuff to worry about, you’ll feel wonderfully unfettered.

While driving a car is cheaper than flying, keeping a car gassed up can be pretty expensive. Even when stacked up against some of today’s most fuel-efficient vehicles, motorcycles give you a fuel economy that’s second to none. Indeed, a decent 250cc motorcycle gets an average fuel economy of about 85 mpg, which is head and shoulders above most cars that are out there today. You can use the money that you would’ve spent on gas on more exciting and enjoyable things–and you won’t have to stop every few hours to fuel up, which means that you will get there that much faster.

Get Around More Easily

Motorcycles are easier to maneuver, so you’re less likely to get stuck in massive traffic jams as you make your way to your destination. That’s especially true in states that allow lane splitting, as you can keep moving ahead while cars and trucks sit and idle. If you’ll be traveling to a major city, you’ll appreciate the ease with which you can navigate various streets on a bike. As you zip from place to place while watching car drivers who are stuck in maddeningly long lines of traffic, you’ll quickly see why motor cycle adventures are where it’s at.

One of the biggest downsides of the typical road trip is that you’re usually cooped up inside a vehicle from sunup to sundown. Even with the windows down and the sunroof open, claustrophobia tends to set in more often than not. If you will be road tripping during the summer, you will be able to soak up the sunshine and take in the fresh, warm air as you make your way from place to place. Whether in the city or the country, being out and about on a bike lets you see the world from a whole different perspective–and it helps you to stay in tune with the world too.

Get in the Zone

As anyone who rides a motorcycle regularly can attest, safely operating a bike requires extreme focus and concentration. When you’re out there doing it, this focus often leads to a sort of Zen-like state that is incredibly liberating. When you’re in the zone like this, hundreds of miles can fly by in what feels like the blink of an eye. When you’re on your bike for hours on end, your everyday cares and worries drift away, and you’re better able to truly live in the moment. Many compare this state to meditation. Whatever you call it, you’re sure to find that it’s one of the best aspects of road tripping on a motorcycle.

Okay, so this one is a bit of stretch–and it probably doesn’t matter to you one way or another. Still, it’s interesting to know that a typical 180-pound man burns about 40 extra calories per hour when operating a motorcycle than when operating a regular car. Considering how much you will be on your bike during an extended road trip, you’re apt to burn a ton of extra calories. You can then easily justify treating yourself to dessert, enjoying an extra pint or sitting down for a truly decadent dinner.

Most road trippers travel via cars, minivans, vans and RVs. Overloaded vehicles burn through even more fuel than less jam-packed cars, so road trips tend to be very bad for the environment. That’s not just because of all of the fuel that is burned but also because of all of the pollution that’s generated. You’ll spend less time stuck idling on a bike as well, and that makes fuel economy even better. While saving the environment may be the last thing on your mind when enjoying a road trip, it’s still pretty neat to know that you are wreaking less havoc on the planet by taking your motorcycle.

Motorcycles are definite conversation starters. You have probably already discovered this just by driving your bike around town. Fellow motorcycle owners and enthusiasts alike are sure to stop and comment on your bike wherever you go. If you’re traveling solo, you will appreciate the camaraderie that goes along with being a motorcycle owner, as it affords you an opportunity to socialize at least a little bit every day. If you’re traveling with someone else, you will both enjoy meeting new people and showing off your bike as you steer it around the country.

You will have a much easier time finding convenient places to park when road tripping on a motorcycle. Even with motorcycle group riding, you only need a handful of regular parking spaces to accommodate everyone. In rural areas and less crowded places, of course, this won’t be as much of an issue. If you’ll be heading to national parks and other popular tourist destinations, however, you will count your lucky stars that you’re on a bike. While others stress out about finding a place to park their vans and RVs, you’ll be able to zip into even the tiniest spaces and be on your way. In many cities, parking garages even offer free motorcycle parking, so you can score in that way as well.

Have a Fun, Exciting Time

Finally, as you are surely already aware, riding a motorcycle is a total blast. Like most people who own one, you probably don’t need an excuse to take it for a spin. The exhilaration of being on a great motorcycle never fades away even after years of enjoying motor cycle adventures. Most bike enthusiasts would surely agree that going on a road trip on a bike makes the trip all the more memorable too. Years later, you will look back on your motorcycle road trip adventure and be so thankful that you were able to do it. Those wonderful memories won’t ever materialize unless you actually hit the road on your bike, so hop to it!

If you’re planning a road trip, own a motorcycle and are looking for a way to make the excursion more enjoyable in a variety of ways, road tripping on a bike is unquestionably the way to go. Every person who owns a motorcycle should take it on a road trip at least once. After giving it a whirl one time, you’ll probably never want to drive a regular car when vacationing again.