The lazy way to Moto-vlogging and recording your motorcycle adventures

Over the years I’ve been very reluctant in taking videos of my motorcycle adventures. It’s not that I don’t want to have video. I really would love to have some kind of video record of my adventures. It’s more that I’m lazy… recording video seems like such a chore:

At various moments during the development of the Scenic app and the Scenic blog, I have thought that it would be really cool to expand into vlogging and setting up a YouTube channel as well. But vlogging, if you want to do it right, is a LOT of work and a lot more complicated than one might think. With vlogging you have to think about additional aspects like:

All in all, a very daunting prospect. One that I’m still not willing to dive into at this point in time. However…

360 Camera’s entered the main stream market about 3 years ago. These camera’s have two fish-eye lenses that, together with some very smart software, shoot video is every direction (3D if you will) and have amazing image stabilization. So you no longer have to point the camera in the right direction and you no longer have to worry if it’s mounted level. It just records everything is all directions. It’s only later, during editing you choose which direction you want to include in the 2D video.

With those kind of cameras you can shoot some amazing riding footage. Have a look at this video by ‘Mike on Bikes’ for some tips and tricks:

So, if I’m ever going to get into recording my adventures, I think it’s going to be a 360 camera. From what I’ve read and seen on the internet, the Insta 360 software is also very good and easy to use. It’s even possible to edit footage directly on your mobile, creating a cool video from your raw footage in minutes.

If you have an Insta 360, or another 360 camera, would you recommend it? Is only that camera enough to record your adventures? What are your experiences with editing and using the camera from day to day? Please leave a comment below and help me and other decide.

If you are more leaning towards the vlogging side of things, or are an avid Moto-vlogger already, Rhönschrat (you know, the guy who makes the Scenic tutorial videos), recently created Pro-Mote. This app lets you control multiple GoPros at the same time through your iPhone, and gives you a comprehensive status of all cameras. Really handy on a motorcycle! 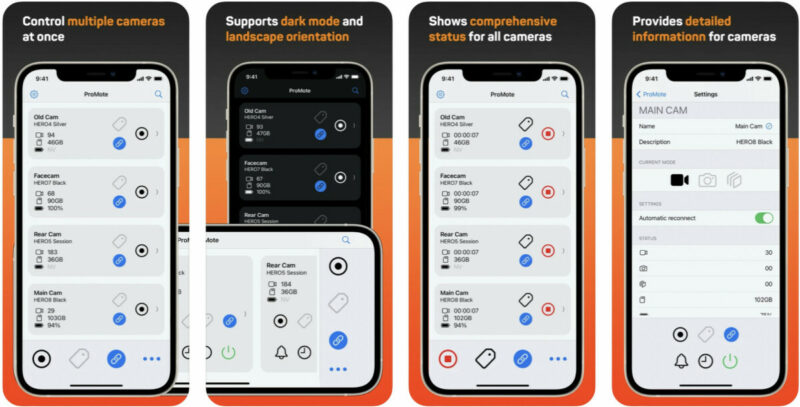