The Aprilia Tuareg 660 is not out yet, but we already know quite a bit about it. With an estimated wet weight around 210 kg / 460 lb, it slides in directly between the Yamaha Tenere 700 and the KTM 890 Adventure, demanding a respectable 2nd place as lightest motorcycle in the middle-weight adventure category. We know less specs form the new Husqvarna Norden 901, but we do know it’s based on the KTM 890 Adventure, and that it looks awesome. So a serious contender in the middleweight motorcycle adventure category as well. Let’s see how they compare to the other bikes in the category, shall we? 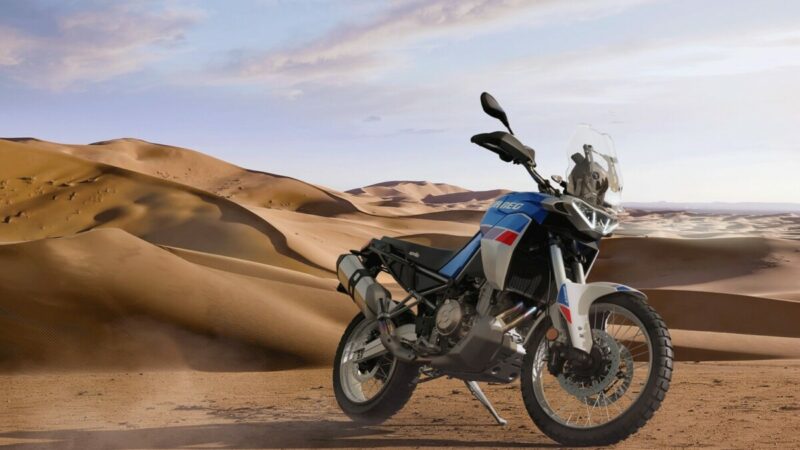 So, the contenders are:

Without much further talk… let’s get into it. 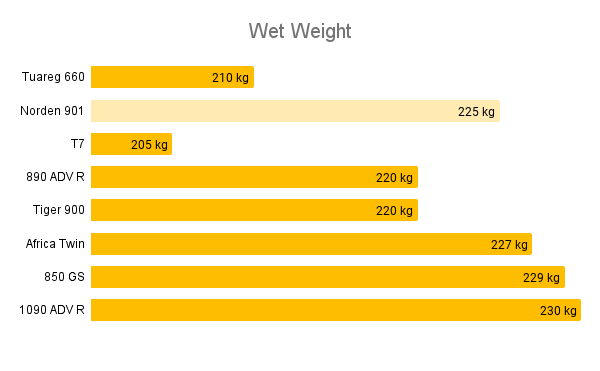 Aprilia already announced the dry weight of 412 lb / 186 kg. With a tank capacity of 18 liters, a few liters of oil and other fluids, we currently estimate the wet weight to be around 210 kg / 460 bl, give or take. The Norden is a bit more difficult to estimate. We don’t know the dry weight yet, nor do we know the tank capacity. The only thing we can go on is its cousin, the 890 ADV R and the fact that it looks a bit more touring capable with possibly a bigger tank. For now, we’ve estimated weight to 225 kg, but this is really just a guess. (For comments about the other bikes, check the other comparison I did a few months back.) 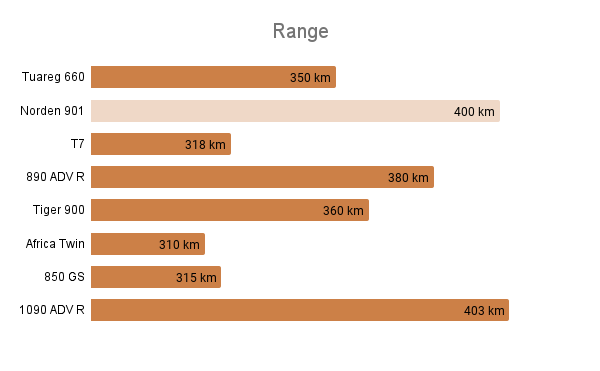 We know the Tuareg will have 18 liters fuel capacity. We don’t know how economical its engine will be, but if we assume it will be similar to the T7’s economics (which has the same engine capacity) then we end up with a range of about 350 km, which is right in the middle of the landscape. Again, for the Norden we have less information, and only its cousin to go by. With that in mind, we guesstimate a respectable range of about 400km. There’s also talk about 2 versions of the Norden. It’s possible that one will have a bigger tank capacity than the other like the BMW 850 vs the 850 Adventure. But, it’s more likely that the differences between two versions will be more in the equipment and suspension area, like the KTM 890 Adventure and Adventure R. (For comments about the other bikes, check the other comparison I did a few months back.) 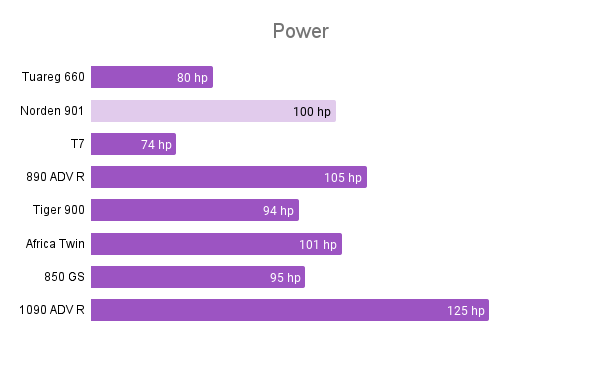 Aprilia says the Tuareg will produce 80 horsepower. That’s more than the Tenere 700, but not as much as the other bikes in the category. Still, 80 hp is more than enough for most riders. The Norden will have the same engine as the KTM 890, but we expect it to be a bit tuned down. Making the 890 performance focussed and the Husqy a little bit (just a little) more touring oriented. Not to worry though, a recent video released by Husqvarna shows that the Norden is still plenty capable offroad though. (For comments about the other bikes, check the other comparison I did a few months back.) 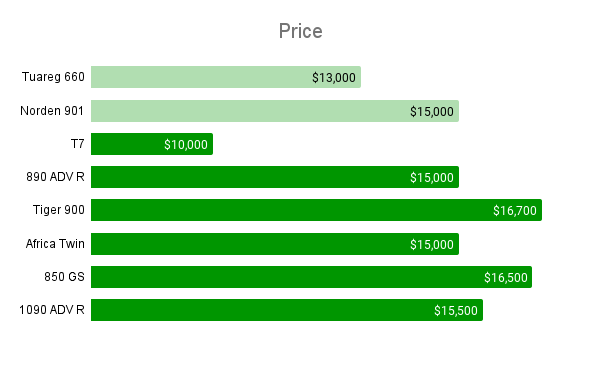 Prices for the Tuareg have not been released yet. Nor have they for the Norden. In almost every aspect Aprilia is position the Tuareg between he Tenere 700 and the KTM 890 Adventure. Therefore we expect the price to be somewhere in between there too. For the Norden… we have no idea to be honest. We know it will probably be close to the 890 Adventure, but how close, your guess is as good as ours. (For comments about the other bikes, check the other comparison I did a few months back.)

I added a comfort score for the Tuareg and the Norden, in line with the previous comparison, from a scale between 1 and 10, with 10 being the most comfortable. 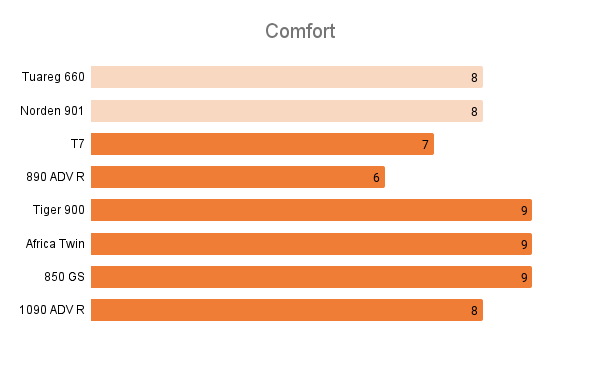 Last year, motorcycle.com rode an early prototype of the Norden 901. Their take on comfort:

“it offers a slightly softer – luxurious, even – more real- world alternative to the sportier 890 Adventure R. It’s subtly more welcoming, especially as you sit more in the bike than on it, so you feel more part of the bike and can ride it more intuitively.”

For the Tuareg, as far as I know, only Justin Dawes over at Cycle World has had the opportunity to ride (an early pre production version of) it. According to him, it’s very comfortable, but I doubt it’s as comfortable as the Africa Twin, the Tiger 900 or the 850 GS. Hence the 8. Here’s Justin’s video:

(For comments about the other bikes, check the other comparison I did a few months back.) 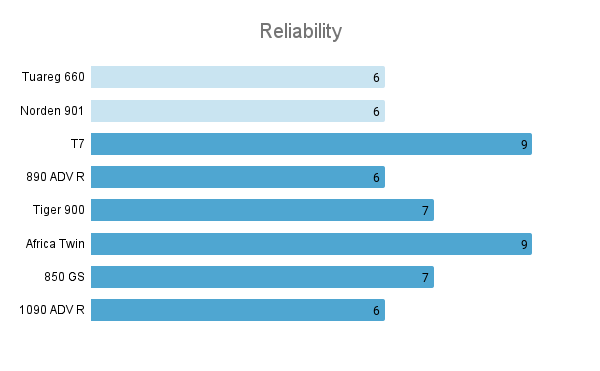 It’s too early to say anything about reliability about these specific bikes. The only thing we can honestly say something about is the reliability of the brand. With Husqvarna falling under the KTM Group umbrella, I gave the Norden the same reliability score as the KTM 890. Time will tell if that can be adjusted upward. The Tuareg 660, being an Italian bike, and the Italians not really known for their reliability, also received a 6. (For comments about the other bikes, check the other comparison I did a few months back.)

Before the Aprilia Tuareg 660, the Tenere 700 was definitely my favorite from all these bikes. The only real downside I saw for the Tenere was its tubed tires. I know that tubed tires have their advantages, but for the kind of riding I do, I’ll take a 5 minute road side repair over a 1 hour repair any day! I’m really liking the Aprilia Tuareg 660. It’s very light, has more than sufficient power, seems very capable offroad and it has a bit more electronics and comfort it seems. In short, it’s a bit less “basic” than the Tenere 700. The reliability could be a problem, but, only time will tell if that’s really going to be an issue. Luckily I’m still far away from needing a new bike at this moment 🙂.